Reposted from the Tax Research UK blog run by Finance for the Future partner Richard Murphy:

Colin Hines and I are in The Guardian this morning: 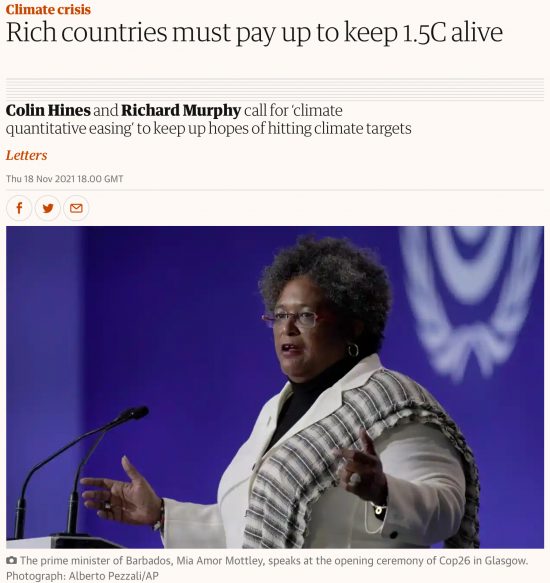 Rebecca Solnit’s inspiring long read (Ten ways to confront the climate crisis without losing hope, 18 November) correctly emphasised the need to maintain hope when tackling the climate crisis by acting collectively, being tenacious through constant campaigning, despite setbacks, and listening to those whom the climate crisis most directly affects.

However, she left out the one factor crucial to achieving the systemic change required to protect the planet: to campaign to make clear how to pay for the enormous upfront costs required for such a fundamental transition.

This was addressed at Cop26 in Glasgow by Mia Amor Mottley, the prime minister of Barbados, which is under threat from rising sea levels. She made this critical but shamefully underreported argument: “The central banks of the wealthiest countries engaged in $25tn of quantitative easing in the last 13 years. Of that, $9tn was spent in the last 18 months to fight the pandemic. Had we used that $25tn to finance the energy transition, we would now be reaching that 1.5 degrees limit that is so vital to us.”